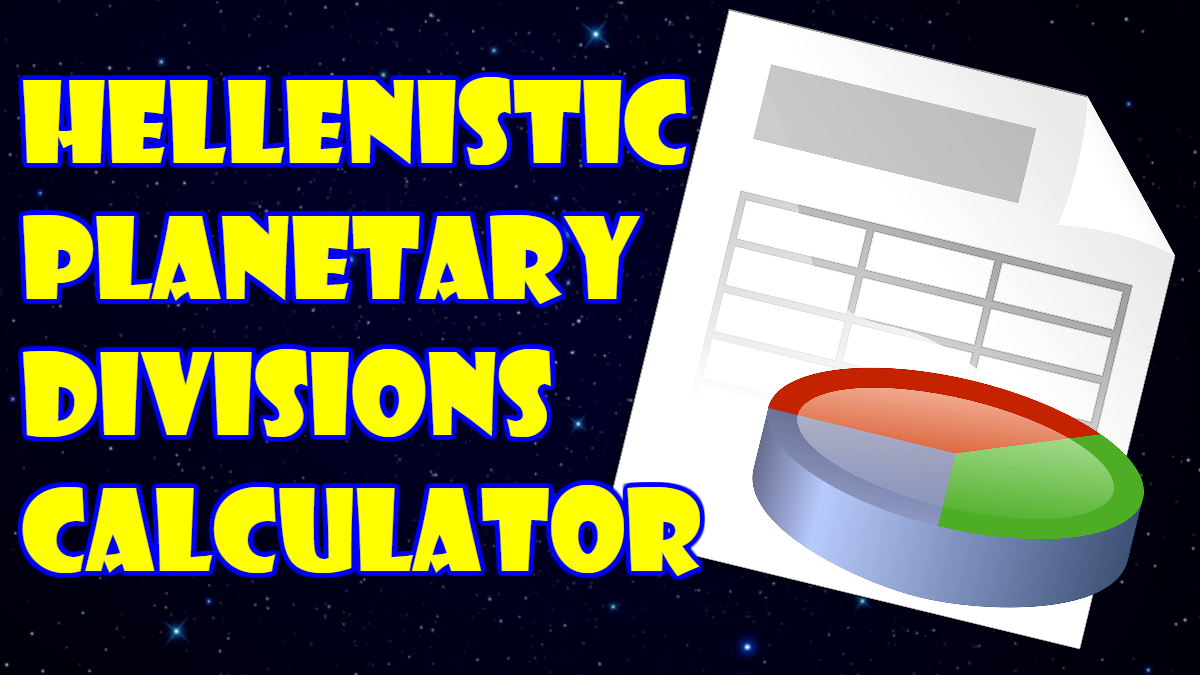 Why You Want This: If you’re interested at all in the revival of Hellenistic astrology and love techniques such as Annual Profections and Zodiacal Releasing, you should be interested in Planetary Divisions!
What It Is: A meticulously designed spreadsheet calculator
What It Does: Automatically calculates all the divisions and combinations of planetary minor periods with ascensional times as outlined by Vettius Valens, to provide the precise dates and times of activations of the potentials of your natal placements and aspects.
Why Is It Better Than Others: It also generates a chronology of your life so you can get a visual sense of what planetary divisions were active and when.
What You Need To Use This: A Google account to access it through Google Sheets
What You Also Need To Use This: A birth date, birth time, birth place, sign positions of all the planets in a given chart and the precise ascensional times for the birth place. (You can find exact ascensional times if you input the birth data here and scroll down to “Rising (Ascensional) Times).
How to Access: After payment is completed below through the Paypal portal you will be automatically redirected to the link to your copy of the calculator on your Google Drive account.
Price: $25.00 USD

If you have any trouble purchasing or accessing the spreadsheet calculator, please email me at patrickwatsonastrologer@gmail.com

Hellenistic astrologer Vettius Valens outlines a peculiar method for looking at times when various planets are “activated” in specific years of a given life on pages 130-137 of the Anthology, Book VII. I call this method “Planetary Divisions”. These times are determined by looking at the following:

The spreadsheet calculator instantly calculates all of these precise dates and times, upon entering one’s birth date, birth time, ascensional times and planetary positions by sign. If you don’t know your ascensional times, it’s fine.

This spreadsheet calculator generates the precise dates and times of activations of aspects within a chart, by degree or by sign. This is determined by looking at:

I’ve made this so that it will be easier to make sense of all this data and how it fits into the broader timeline of one’s life, as well as to clear up a point of confusion in the text. Valens describes these planetary activations as being active for a given year, which suggests that the planets lend a kind of general quality to the entire year, which is clear from his examples. However, he also notes that certain activations complete at particular points within a year. This brings up the question of if the specific times of activation are most important or if they merely contribute to the general nature of the year. This calculator gives you the specific dates and times of each activation and the years in which they occur, allowing modern astrologers to find out.

Be one of the first astrologers in modern times to master this technique and get your copy of this calculator today!

Patrick Watson Astrologer
5.0
Based on 16 reviews
powered by Facebook