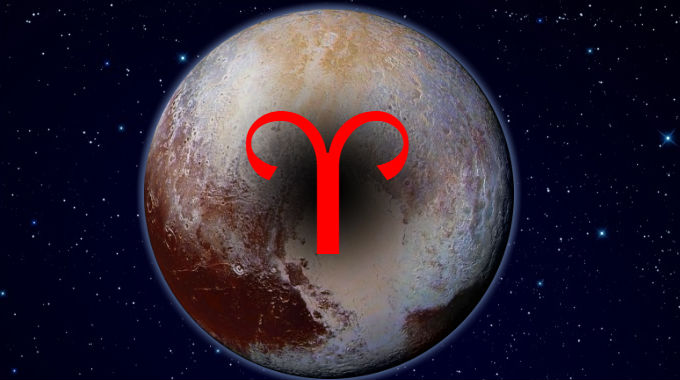 Pluto’s orbit is extremely eccentric, wildly off the ecliptic and sometimes closer to the Sun than Neptune, spending 14-31 years in a sign. It was discovered in 1930 at a time when fascism was ascendant in the world, when humanity gained awareness of fundamental atomic forces which if broken cause apocalyptic explosions. Accordingly, Pluto is a planet of extremes, making big things small and small things big. It’s also associated with tyranny and corruption, absolute control and absolute power, figuring into the charts of people who are movers and shakers in elite systems such as government, banking corporate boardrooms. The condition of Pluto at the time of our birth shows what role we may play in our 14-31 year generation’s deconstruction and transformation in the topics of its sign and house placement.

Pluto in Aries is in a cardinal fire sign, empowering, warping, corrupting, deconstructing, transforming the topics of its ruler Mars. This sign is associated with boldness, courage, bravery, passion, but also violence, treachery, villainy. So Pluto in Aries empowered, warped, distorted, corrupted, deconstructed and transformed these significations. People from this span of time may stand out as bold, entrepreneurial, rough and tumble, hardscrabble as a group. Individuals with aspects from Pluto in Aries to more personal planets and points may stand out as their cowboys and rugged individualists.

People also take on characteristics of the time they come from. Accordingly, the 1822-1853 Pluto in Aries period distorted the notions of leadership, entrepreneurship and courage into tyranny, exploitation and villainy. “Manifest Destiny” resulted in the mass forced relocations and genocide of Native American peoples as the white Americans aggressively expanded westward for new territory, and the tensions over the enslavement of Africans was reaching a boiling point. Many robber barons, outlaws and gunslingers of the old west were born in this period. Several prominent gun manufacturers have their origins in this era, such as Smith & Wesson, Colt and Winchester. The handles of these guns from the 19th century were often constructed using ram’s horn, and the image of Aries is a ram! In short, Pluto in Aries was the savagery and cruelty by which the rugged individualism, violence and lawlessness of the Wild West was born.

This is especially true if you were born with Aries rising. Whether you experience the better or worse significations of this position depends on the kind of aspects it makes with the other planets.