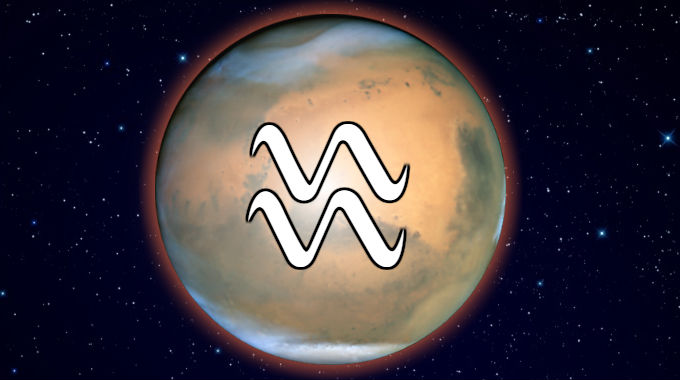 Mars is the closest planet to Earth that is further away from the Sun, representing the first point of departure from the inner solar system. Mars’s cycles are rough and irregular, further off the ecliptic, jagged in his recurring geometry as his scarred red face crosses the sky. Accordingly, Mars is the planet of action, courage, conflict, passion, separations, divisions. The condition of Mars at the time of our birth says something about how we fight for what we want, our competitive spirit, our propensity for bravery, our experience with danger and risk.

Mars in Aquarius is in a fixed air sign and takes on the qualities of its ruler, Saturn. This is someone whose strength is in their detachment from themselves, their lack of self-regard, implacability and indifference. They’re willing to endure pain as long as it hurts you too, like a warrior robot, a Terminator. How do you fight someone who doesn’t care if you hurt them? With Mars in Aquarius, this is someone who is provoked by limitations on their authority and independence and do not yield until the other party meets the demand or otherwise resolves the conflict. In conflicts, there can be a tendency to treat everyone the same way regardless of how close or unfamiliar they are.

This is especially true if you were born with Aries, Scorpio or Aquarius rising. Whether you experience the better or worse significations of this position depends on whether you were born during the day or at night, and the kind of aspects it makes with the other planets.