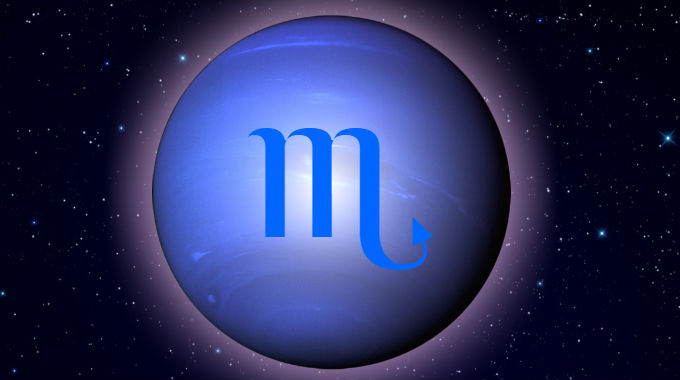 Neptune is the first planet to be completely invisible to the unaided human eye on Earth, only discovered indirectly by solving the mystery of perturbations in the orbit of Uranus. Accordingly, Neptune represents the transcendence of visible limits, signifying mystery, spiritualism, dreams, fantasy, escapism, irrationality, illusions, delusions. It also has special significance for drugs and pharmaceuticals, mass entertainment, trends in mainstream music and movies.The condition of Neptune at the time of our birth shows what role we may play in our 14-year generation’s collective idealism in the topics of its sign and house placement.

Neptune in Scorpio is in a fixed water sign, dissolving, synthesizing, idealizing and artificially reconstructing the significations of its ruler Mars. This sign is associated with the profane, obscene and scary, as well as combativeness, dark matters and secrecy. People from this 14-year span of time may stand out as hardcore and iconoclastic as a group, and individuals with aspects from Neptune to more personal planets and points may stand out as their visionary witches and warlocks, renegades and deviants. The condition of Neptune at the time of our birth shows what role we may play in our 14-year generation’s revolution in the topics of its sign and house placement.

People also take on characteristics of the time they come from. Accordingly, the 1956-1970 Neptune in Scorpio period, 1960’s counterculture interfaced with religion and mass media in ways typical of Scorpio: provoking fear, revulsion and intrigue. In popular media, the surreal and scary Twilight Zone mesmerized TV audiences. This period saw the breakdown of many taboos surrounding the explicit, graphic, realistic depiction of sex and violence in popular media in movies and literature, with books like “The Tropic of Cancer” and movies like “Bonnie and Clyde”. Classic horror movies were released in this period, introducing slasher movies and zombies, including: Psycho, Rosemary’s Baby, Night of the Living Dead, Peeping Tom, Black Sunday, etc. There was hysteria about occult religious practices and witches as the Wiccan religion went global and Anton LaVey established the Church of Satanism. Scorpio is associated with the reproductive organs, and it was during this Neptune in Scorpio period that the birth control pill became available to the public.

This is especially true if you were born with Scorpio rising. Whether you experience the better or worse significations of this position depends on whether you were born during the day or at night, and the kind of aspects it makes with the other planets.