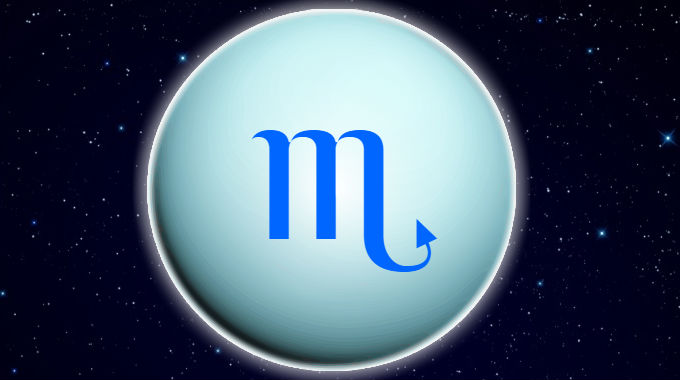 Uranus in Scorpio is in a fixed water sign which revolutionizes, radicalizes and disrupts the significations of its ruler Mars. This sign is associated with the profane, obscene and scary, as well as combativeness, dark matters and secrecy. People from this 7-year span of time may stand out as hardcore and iconoclastic as a group, and individuals with aspects from Uranus to more personal planets and points may stand out as their revolutionary outlaws and badasses. The condition of Uranus at the time of our birth shows what role we may play in our 7-year generation’s revolution in the topics of its sign and house placement.

People also take on characteristics of the time they come from. Accordingly, in the 1975-1981 Uranus in Scorpio period, the raging sounds, bad attitude, spiky fashions and underground scene of punk rock arrived into the world like a lightning bolt, typified by groups like the Sex Pistols, the Clash, Black Flag. In this same period, stealth technology was first developed by the military which allowed covert missions to be undetected by radar. During the 1891-1898 Uranus in Scorpio period, X-rays were first discovered, producing ghostly images of things we would not normally see.

This is especially true if you were born with Scorpio rising. Whether you experience the better or worse significations of this position depends on whether you were born during the day or at night, and the kind of aspects it makes with the other planets.