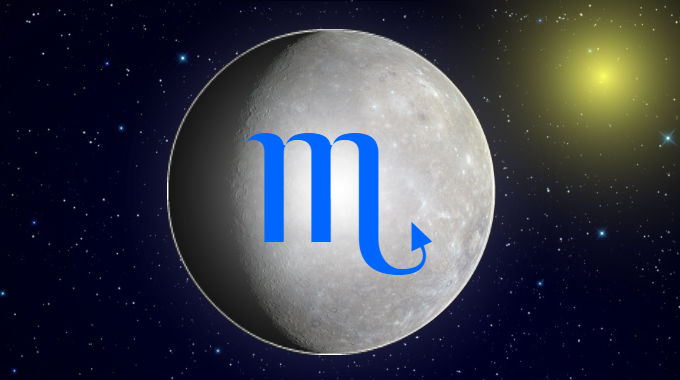 Mercury is tidally locked with the Sun, so one side is perpetually hot and the other half is perpetually cold. Similarly, Mercury is a planet of dualities, a wildcard, a trickster, sometimes hot, sometimes cold, sometimes good, sometimes bad. Mercury is the fastest planet in our solar system, appearing to zip backward between the Earth and the Sun three times each year. Mercury’s speed and erratic behavior mirror the restlessness of the mind, the rapidity of thought, the fluidity of speech. As the planet closest to the Sun, Mercury serves as an emissary, a translator, a messenger of the Sun. In astrology, Mercury represents the way we think and reason, the way we speak and communicate, saying something about our interests, skills and hobbies, our sense of humor.

Mercury in Scorpio is in a fixed water sign and takes on the qualities of its ruler Mars: probing, secretive and sharp. People with this placement tend to be shrewd detectives, saying as much by what they don’t say, and understanding more than what is said to them. This can make them great investigative journalists and researchers who are willing to do what it takes to get to the truth. On the downside this can also lead to paranoia and judgment clouded by passion and suspicion. Sometimes this placement shows an obsession with taboo subjects and dark topics. They’re probably tickled most by dirty jokes and dark comedy.

This is especially true if you were born with Gemini, Virgo or Scorpio rising. Whether you experience the better or worse significations of this position depends on Mercury’s relationship with the Sun and whether you were born during the day or at night, and the kind of aspects it makes with the other planets.