My new video series “12 Different Types of Aries Rising” is my attempt at systematically decoding the overall archetypal meaning of Mars in each tropical sign and whole sign house in its context as the Ascendant Ruler when Aries is rising in a natal chart. It is the first entry of my somewhat larger project “144 Different Types of Ascendant Rulers”. Scroll to the bottom if you just want to get to the video, but I think you’ll want to read these next couple of paragraphs. 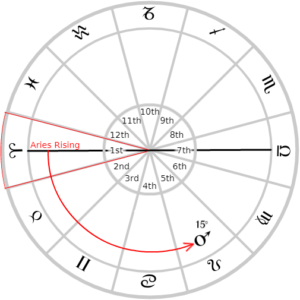 The Ascendant and its relationship to its planetary ruler are supposed to more properly represent “you” in your natal chart, beyond even your Sun and Moon. This might seem strange to you if you’ve been taught that all parts of your chart represents different parts of yourself, that you are your chart. Traditionally however, there is more of a hierarchy and roles that the planets play. The chart does not just represent you, but things beyond yourself as well. It’s not to say that other planets can’t play a part in who you are, but it’s just as each story might have a more central protagonist with a cast of supporting and ensemble players, certain planets have a more central role than others depending on the relationship of the signs to the Earthly horizon at a particular place and time.

In horary astrology the Ascendant ruler represents the Querent and the nature of the question. In inceptional and electional astrology the ruler of the Ascendant represents the general nature of the event or undertaking. Accordingly in natal astrology, the Ascendant ruler is supposed to be the planet which can generally represent one’s self, identity, essential vitality,  life-force, nature, characteristics and even appearance. Its house placement suggests a special area of focus in one’s life. Since I use whole sign houses, there are 12 signs and houses for the ruler of each of the 12 rising signs. Even if you don’t buy whole sign houses, there must be some unique archetypal consistency for Ascendant rulers common by sign. 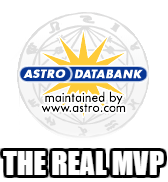 I have now spent several months sorting through all of the available birth data on AstroDataBank in order to find the clearest practical real world examples of each Ascendant ruler in each sign and house. I did this manually which is exactly as tedious, repetitive and mind-numbing as it sounds, until miraculously with the help of Dougie Birrell, I was able to sort through AstroDataBank’s data on SolarFire. Looking at this data in bulk allowed me to clarify my thinking about how many different kinds of people can be described despite having the same Ascendant ruler in the same sign and house.

In a good number of cases, the Ascendant ruler was more obvious or expected in its manifestation, but in other cases it was not. This is when I noticed how in these cases, it was often other angular planets or major aspects that formed with the Ascendant Ruler that significantly altered its expression. This included aspects or lack of aspects to their sect light, differences in its phase or its location within the sign, occupying different bounds or conjunct different fixed stars, etc.

So to prove that I didn’t just cherry-pick examples that fit expectations, I took the examples that didn’t fit the superficial expectation of someone with Mars ruling the Ascendant and plausibly explained why they could be so otherwise Mercurial, Venusian, Jovial, Saturnine, etc. I also found it was instructive to see what happened to these individuals when their Ascendant ruler or 1st House placements in Aries were activated by annual profections, because the kinds of events that can happen in those times can be really evocative of what these placements are supposed to mean overall.

So often we deal in abstractions about what a given placement means, and I think it really helps to see it in action with concrete real world examples. It gives you a kind of shorthand way of remembering and understanding all the different combinations of placements. So that’s what I think the main benefit is of this work I’m doing, it’s proof of concept. So anyway, yeah, I spent months on this, hours and hours and hours of work. My wife hasn’t been happy about it. So guess what guys, I want you to see this, but I also need you to pay a small amount to access the videos. It’s 4+ hours which is divided over 16 videos, one video for each Ascendant/ruler combo and some extra ones for some of my other work with aspects to Mars, planets rising in the 1st House, and annual profections.