When I first heard the news that Disney was launching its new streaming service Disney+ on November 12th 2019, I immediately noticed that this is essentially the date of the next Sun-Mercury interior conjunction in Scorpio, the eye of the storm of the next Mercury retrograde period. Mercury is the planet of communications, commercial enterprises, commercial transactions, marketing and advertising, technology, logistics, competition, uncertainty, unsettlings, disputes, etc. Given Mercury retrograde’s reputation for disorder and unpleasant surprises and snafus, one might suspect that the rollout of Disney+ will not go smoothly, and there seems to be a bit of history to support this idea.

Disney+ is looking to challenge the dominance of Netflix in the streaming market. To that end, Netflix shows involving Disney-owned properties have ended production and they spent 71.3 billion dollars on acquiring 20th Century Fox to bolster their already impressive offerings. In other words, Disney has invested enormously in making Disney+ a so-called “Netflix-killer”, and so a lot is riding on its success. This makes it all the more significant that it is being released at a time associated with mishaps of all sorts. I do think it will ultimately be a success for Disney, only that it will have a shaky introduction.

Making this kind of judgment based purely on the phase of Mercury is a bit short-sighted. After all, I’m not considering how this interfaces with an inceptional chart for Disney or transits for the CEO or other leadership responsible for the success of Disney+. However, as supporting evidence I’m going to look at previous Mercury retrogrades in Scorpio, to see how product launches from those times have fared.

Mercury retrogrades occur 3 times each year, and every year, the 3 areas of the zodiac where Mercury goes retrograde precess by several degrees. If you track these retrogrades year after year, you’ll notice they return close to their original position after 20 years. This is why the minor period of Mercury in Hellenistic astrology is 20 years, it’s when the Sun and Mercury both return close to the same positions in the zodiac.

I also have this list available as a free PDF to view/download here.

Mercury will go retrograde in the same part of the zodiac after 6, 7, 13, 14 and 20 years. This is because the 20 year period can be broken into three chunks: 6+7+7, (also understood as 6+6+1+6+1). Imagine someone juggling three balls in ultra slow motion, and each ball replaces the position of where another one was. Sort of like this.

After 6-7 years, Mercury’s three loops precess backward through the zodiac so that:

After 13-14 years, Mercury’s three loops precess backward through the zodiac so that:

After 20 years, Mercury’s three loops have returned to where they were 20 years prior.

But here’s the thing, you can still get a rough zodiacal recurrence regardless of how you arrange these blocks of time, so you can look at the 20-year cycle of Mercury as 6+7+7 or 7+6+7 or 7+7+6. This is how you end up with Mercury going retrograde in a similar area of the zodiac after 6, 7, 13, 14 and 20 years. So in order to understand what the November 2019 Mercury retrograde might be about, it will help to look back at what happened during its cyclical and zodiacal recurrences, 6, 7, 13, 14 and 20 years ago. In order to find relevant examples for Disney+, I’ve focused my attention on the release of digital products and services.

One of the largest failures of the dot-com era was the European site boo.com, which was meant to be an Amazon-style site for sports fashion and sports gear and had millions of dollars backing the effort. It launched on November 3rd 1999, within a day of Mercury’s retrograde station. The story of Boo.com’s rise and fall are chronicled here: “Boo hoo: Learning from the largest European dot-com failure”. 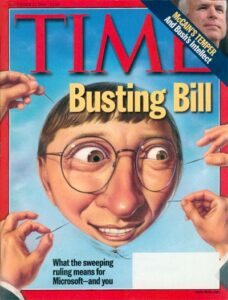 Webvan.com is another site emblematic of the dot-com era’s excesses. While it didn’t begin its business during this Mercury retrograde, it did launch its IPO on November 5th 1999 when Mercury had just stationed retrograde. While it raised hundreds of millions of dollars in that month, Mercury’s retrograde motion suggested the gains were not built on solid ground, and the business came crashing down less than 2 years later.

It wasn’t just start-ups though. Even dominant companies came under fire in this retrograde. On November 5th 1999, a federal judge ruled that Microsoft was in fact a monopoly. This was a pretty big deal. Check out the Time Magazine cover for November 15th 1999 to the right. While Microsoft would eventually diversify by the next time Mercury returned to this degree area, it wouldn’t be exactly smooth sailing.

On November 22nd 2005, Microsoft launched the XBOX 360, its next-gen challenge to Sony’s dominance in the video game console market. Production began just 69 days before. Microsoft was not able to produce enough of them to meet initial consumer demand, and 10% of all units were resold on Ebay (at much higher prices of course).

Also plaguing the XBOX 360 since the very first days of its launch has been its high failure rate, and the much-dreaded unfixable “Red Ring of Death” error. Nearly a quarter of all XBOX 360’s have been returned under warranty due to the “Red Ring of Death”. Here is one user’s novel solution:

This particular Mercury Retrograde promised to be pretty nasty since it was co-present with Mars in Scorpio. Sony launched the Playstation 3 on November 11th in Japan and November 17th in North America, and it did not go well.

Typical of Mercury retrograde, there were technological problems that delayed the full release of the console, leading the company to overstate its supply, and the demand was high. The shortages led to robberies and even fights amongst customers waiting in line all night for a product that was not there. This was the atmosphere of a product launch while Mercury is retrograde conjunct Mars in Scorpio:

They had to fix all these issues with the Playstation 3 and gradually rolled out more of them in the next year, but damage had already been done. It was widely perceived that the problems with Sony’s Playstation 3 allowed Microsoft’s Xbox 360 to gain a competitive advantage. Although if we’re strictly counting by sales, the Nintendo Wii slayed both of them due to its superior price point, the novelty of its motion-based controls and universal appeal and accessibility. The Nintendo Wii was launched on November 19th 2006 once Mercury had stationed direct, which was a more positive time to release a commercial product because Mercury has resumed its regular forward motion.

On November 18th 2012, Nintendo released the Wii U, the followup to its massively successful Wii video game console. However it was a noted disappointment for Nintendo, considering the Wii had previously been so successful. This was largely attributed to its lack of third party support, paltry selection for games and a frustratingly short battery life for its gamepad controller. This isn’t just me saying this though, here’s a whole article among dozens analyzing Nintendo’s “greatest commercial failure” in the Wii U. Here’s a whole video detailing how the Wii U was the greatest flop in Nintendo history.

This particular Mercury retrograde promised to be ultra frustrating and consequential because it was co-present with Saturn in Scorpio. The biggest Mercury retrograde story from this time was the unsuccessful launch of HealthCare.gov, the online portal for acquiring health insurance through the marketplace established by Obamacare. While the website was not launched during the Mercury retrograde proper, it was released on October 1st 2013, when Mercury was at 2 Scorpio, the beginning of the pre-retrograde Mercury shadow period. The problems with the site were immediate, with thousands of people unable to use or successfully complete their applications.

The fixes to the website were implemented during the Mercury retrograde period, across October-November 2013. Most of the problems seemed to have gone by late November when enrollments picked up, once Mercury had stationed direct. In addition to the problems with the website itself, there were also over 700 fake Obamacare websites deliberately designed by opponents of the Obamacare law and other scammers trying to collect people’s sensitive personal information. As always with Mercury, there’s a humorous side to things depending on how you look at it.

You can see why even if we just use this one factor of the phase of Mercury and its recurrence in this area of the zodiac, that one could be concerned about Mercurial maladies for the launch of the service. What could these look like?

Aspects to Mercury from the malefics seem to show us whether or not the Mercury retrograde periods may be more challenging. The Disney+ launch does not have any of those. In addition, because it’s a digital service, there won’t be the possibility of fights or anything like there were at the Playstation 3 launch when Mercury was retrograde conjunct Mars. There will however, be a full Moon in Taurus opposite Mercury on the day of the launch. The Moon often represents  the mood of “the people” in inceptional charts, and with the Moon at its brightest opposite Mercury, this could suggest an overload of people on day 1.

Since it’s a digital service and Mercury is the planet of technology, what seems most likely is that it will be overloaded by high demand, so people might not be able to login at first, or even when they put in the correct information, it might not recognize them as a customer, or it will just run really slowly, or there’s some other error which may have to be fixed. This is something they’re actually pretty worried about and are actively working to prevent. In any case, social media would likely have a bonanza with memes at Disney’s expense if it doesn’t operate as expected, and its mission to become the leading streaming service might not go as planned.

I don’t know what the exact launch time is so, I’m presuming 0:00 am on November 12th 2019. It’s launching in the US, Canada and the Netherlands on that date, so presumably the earliest time it would be available would be 12:00 am on November 12th in the Netherlands. I’m not sure if that should be considered or if Burbank, CA should be considered instead, since it’s the location of Disney’s HQ. In light of these ambiguities, I left the angles out of this chart. You can still see the Moon is approaching fullness as it opposes Mercury and the Sun.

Now, none of this is to say that Disney won’t make a ton of money from Disney+, or that it won’t be successful overall, just that the rollout might be a bit rocky. After all, Netflix started during a Mercury retrograde in its exalted sign of Virgo, and it ‘s still going strong but it doesn’t look like it’s going away quietly. The Mercurial streaming wars are just getting started. Game on!