‘If you have planets in fall or detriment, you are doomed. Doomed I tell you! Doomed with the doomiest of doomy dooms’…is what some people mistakenly assume astrologers mean when they talk about planets lacking essential dignity. No, you are not doomed, at least on this basis. So let’s put this puerile bullshit to rest with what I hope is the most straightforward explanation possible of what it means when a planet is in fall or detriment.

The signs are the homes of the planets. Each planetary archetype is naturally matched with its diurnal and nocturnal homes in the zodiac. When a planet is in the opposite sign that it rules, it is in detriment, exile or more properly in its antithesis.

To contribute something to the recent essential dignities discussion, I just wanted to reiterate that the word “antithesis” is a much better translation of the original Greek term for “detriment,” and this is what I’ve been using in my head for a few months now. https://t.co/uJjyvEfUHK

The exaltations are honored places of the planets. Each planetary archetype is particularly well matched with its exaltation. When a planet is in the opposite sign of its exaltation, it’s in its fallen sign, or it’s simply in fall.

Some people have a really big problem with the idea that some planetary placements are “better” than others but I think this comes from not really understanding what this actually means. So I hope to show in a pretty straightforward way what a planet being in its antithesis or fall actually means.

Okay. What doesn’t fit in this picture? 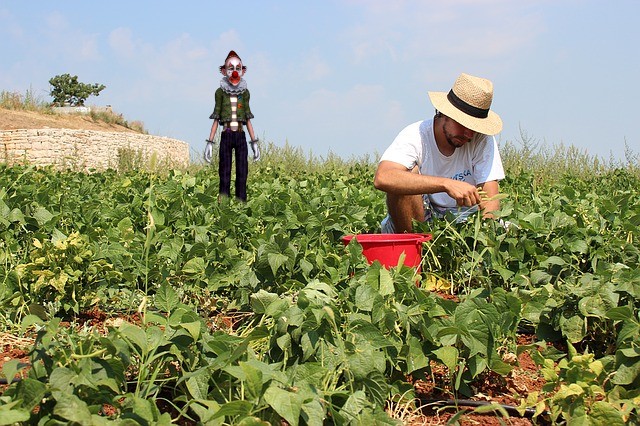 If you thought it was the clown looming behind the gardener, well of course you’re right. What clown isn’t out of place in any picture? But what about in this picture? 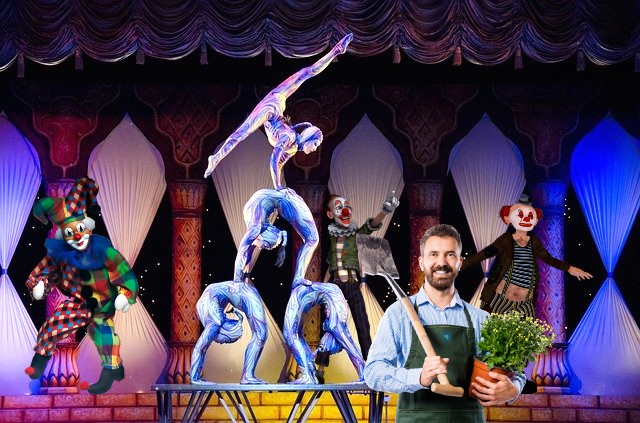 Well, now it’s the gardener who is out of place in this circus/clown/cabaret thing.

Now, even though it’s kind of unusual to have a clown working as a farmhand, there’s nothing…intrinsically wrong with it. Maybe the clown could adapt to farm life. Maybe they can use their juggling skills to efficiently pick potatoes and load up wheelbarrows with produce or something. Maybe they could be a walking scarecrow. And even though a gardener isn’t a natural fit for that clown life, maybe he could adapt to this environment, maybe learn how to juggle flowerpots or do a hat-and-cane style tap dance with his spade.

Whatever their ability to adapt, the fact remains that a clown is out of place on a farm, and a farmer is out of place in the circus. There is a fundamental mismatch between these people and their environments that goes beyond individual bias. When a planet is in a sign it rules or where it’s exalted, it’s in an environment which matches its strengths. When a planet is in a sign of its antithesis or its fallen sign, it’s in an environment which does not honor its strengths. This is not a death sentence, but it is still qualitatively distinct from having a planet in its own sign, and in some ways, yes, a tougher experience for the planet concerned but rewarding in its own way.

Let’s take a look at Mars. The Mars archetype is that of the warrior, the fighter, the athlete. Aries is the diurnal cardinal fiery home of Mars, so it’s a competitive environment that rewards courage, action and struggle. If we were to imagine an environment that encapsulates this idea, we might think of a battlefield, a sports arena, a boxing ring, a race track or a gym. Naturally, the warrior is at home on the battlefield, the athlete is at home in the sports arena. This is where their strengths are put to good use and valued.

The opposite sign of Aries is Libra, the diurnal cardinal airy home of Venus. The Venus archetype is that of the charmer, the peacemaker, the artist. Accordingly Libra is a cooperative environment that values social graces, balance and harmony. If we were to imagine an environment that encapsulates these ideas, we might think of a wedding, a swanky gala or soiree. Naturally the social animal is at home in these environments, where their strengths are put to good use and valued.

Let’s now imagine that Mars has traveled to Libra. The rough and tough Martial warrior has entered its antithesis: the Venusian domain of a dinner party. Mars is not perfectly suited to this environment of polite society, it’s just not a natural fit…

People with Mars in Libra then might experience, at least in certain areas of their life, situations where acting with boldness, courage or competitiveness happens in a context where it is inappropriate or ineffective. Whereas people with Mars in Aries may find more constructive or approved environments to exercise these instincts and behaviors. In order to adjust and adapt to this environment, Mars must become more Venus-like, but it does this awkwardly in the only way it knows how: like Mars.

Because Mars can not just be itself in Libra, there can be a tendency to overcompensate for its inherent discomfort with its environment by embracing the values of the sign. Now Mars is still aggressive, but aggressive on behalf of the values of Libra, or through the means of Venus. Mars is forced to deconstruct its own nature, becoming somewhat of a contradiction. In the case of Mars in Libra, it can be a soldier for harmony, a warrior for peace, an agitator for balance. John Lennon the thug/wifebeater-turned-artist/peace activist is a particularly vivid example of this contrarian Mars in Libra dynamic.

At other times, Mars in Libra may overcompensate for its inherent discomfort with its environment by over-embracing the values of its own nature, deliberately in rebellion or in protest of its unfamiliar environment, lashing out and becoming a kind of wild bizarro version of Mars in Aries.

We can see this dynamic in the chart of Heather Locklear. She was born with Aries rising with her Ascendant ruler Mars in Libra, the 7th house of partnerships. In many ways she epitomized Libran glamor as a talented actress and as a beautiful model. However, she also gave indications that she was not happy in this Libran environment with its confining Venusian role and expectations. In stark contrast to her squeaky clean bubbly persona, she deliberately chose partnerships with “rough”/”bad boy” types, such as heavy metal rocker Tommy Lee. She explicitly said that she was “rebelling through” her partnerships and exploring her “dark side”. Unfortunately, these relationships were tumultuous and Locklear has struggled with drugs and arrests for domestic violence incidents against her partners since.

There’s another way to look at planets in antithesis though. What if Libra is a place where Mars is actually needed most? Maybe this Libran dinner party could use some spicing up, what if the Venusian values of civility and cooperation come at the expense of truth or justice that only Mars could object to? What if Libran principles need a warrior to fight for them that Venus could never be just by itself?

As much as Mars may be uncomfortable in Libra, it is ultimately important for the Mars archetype to reflect on the excesses of its own nature and make up for the deficits of the sign it is foreign to. I think the key to finding success with planets in antithesis or fall is in embracing the paradoxical combination of its nature and its environment along with all accompanying struggles and awkwardness.

So to sum it up in bullet point format:

Now you’re probably wondering if you’re going to get some fun demonstrations for all the planets in antithesis and yeah sure I’m down for that….in a Part II.