This article summarizes some of my key findings from the paper I released last year on Trump’s Zodiacal Releasing from the Lots of Fortune and Spirit. I should caution that my approach to Trump’s chart is non-standard: In Trump’s chart I believe his Lots of Fortune and Spirit should be reversed, so that his Fortune begins releasing from Pisces even though it is in Aquarius, and that Spirit begins releasing from Aquarius even though it is in Pisces. While this is controversial, it would not be a total departure from source texts and it would not be unprecedented. Furthermore, it seems to explain his chronology much better according to the basic principles of Zodiacal Releasing. Even if you do not accept my arguments in favor of switching his Lots, you may read the following correlations through the lens of Fortune (as a circumstantial event) as opposed to the lens of Spirit (as a deliberate action).

One of the most fascinating properties of Zodiacal Releasing is that its fractal organization of time allow thematic references to be interpreted across different time periods. In particular, the first L2 subperiod in a new L1 major period can be seen as a microcosmic version of what the entire major period is about because they go through the same releasing sequences. This ends up being useful for predicting what might be expected from encountering a given period, by looking back at what happened under similar sequences. When we do this for Trump, we see that in some sense Trump will be reliving the dynamics of 2011. 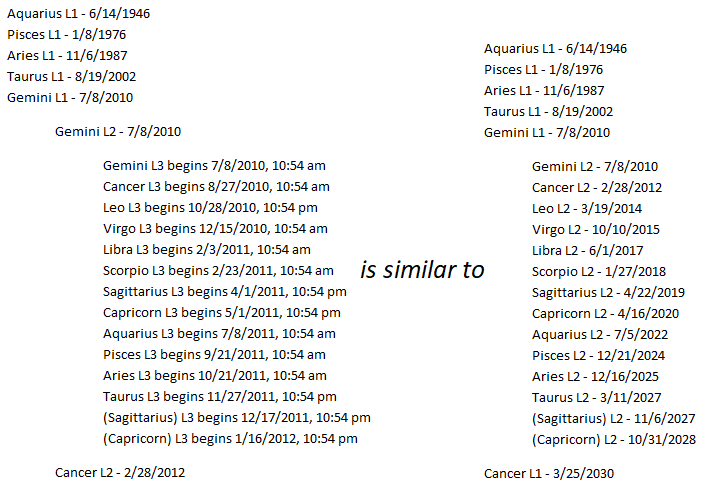 The reason why I’m talking about this now is that Trump is on the verge of entering a new Capricorn L2 period. This new Gemini-Capricorn period (4/16/2020-7/5/2022) is similar to his Gemini-Gemini-Capricorn period from  5/1/2011-7/8/2011. Therefore, the events of that time could have significant implications for the 2020 election. So what was Trump doing around that time? Well…

Much like Mercury’s rulership of his major period, he took on the motivations and means of Mercury – to create controversy and mischief. With his Sun and Uranus in the sign of Gemini, this also connects this time of his life to unbounded leadership aspirations. By my reckoning of his Fortune angles being mutable instead of fixed, this Gemini period would also be a peak period relative to Fortune, which would be appropriate for the time he achieved a new level of political notoriety and became President. He began the Gemini period by injecting himself into the “Ground Zero Mosque” debate in July of 2010, seemingly sensing a political opening through exploiting voters’ prejudices, especially as they projected them onto President Obama supposedly not being a “real” American, a secret Muslim born in Kenya, etc. The fact that this occurred during the first L4 periods of his 20 year Gemini period is also suggestive of the themes of this chapter in his life.

He announced to friends and supporters at a New Years Eve party in 2010 that he would run in the 2012 election. This took place under his Gemini-Gemini-Virgo period (12/15/2010 – 2/3/2011), and this was the foreshadowing of his successful 2016 run which took place under Gemini-Virgo (10/10/2015 – 6/1/2017). With Fortune in Pisces, these are all majorly angular periods. It was in that same period of early 2011 that he began making his first public pronouncements of his doubts about Obama’s birth place and the authenticity of his birth certificate.

His birther campaign continued to escalate, dominating the news cycle. It reached a new height in April 2011, which was the precise timeframe of his Sagittarius L3 period, which would be his Fortune 10th with Fortune in Pisces. The New York Times even characterized this time with the headline “Inside the Six Weeks Trump Was a Nonstop Birther”. This charade all came to a screeching halt over the course of a couple of days with a series of humiliating events that centered on the beginning of Trump’s Capricorn L3 period. 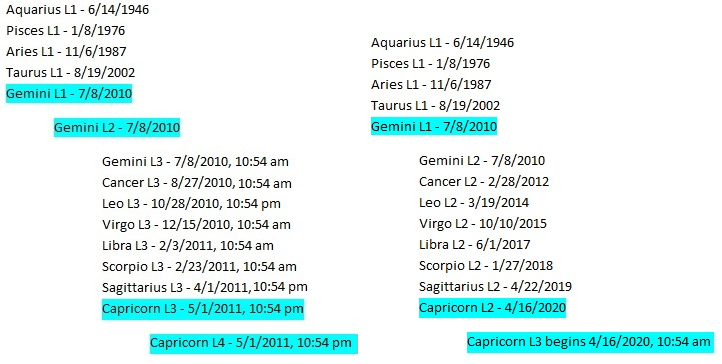 So to recap – In the course of just a few days, Obama dismantled Trump’s conspiracy theory about his birth, publicly and hilariously roasted him, and then claimed credit for killing America’s most notorious enemy. Trump could not have seemed more pathetic and small at that moment. Utterly humiliated, he officially dropped out of the race weeks later on May 16th 2011 under the sequence Gemini-Gemini-Capricorn-Aries:

One of the reasons Gemini-Capricorn would seem to be so unfortunate in Trump’s chart is because the rulers are Mercury and Saturn in Cancer in his 12th house, the house of enemies and self-undoing. And if there is any kind of pattern to how Trump is ever defeated, it’s that he loses confidence in himself and drops out by his own accord. There is a particular releasing sequence which seems to describe this “humiliation/drop out” dynamic: Capricorn-Aries.

Starting on April 16th 2020, Trump will arrive at the sequence Gemini-Capricorn-Capricorn-Capricorn. If past is prologue then those humiliating days of early May 2011 would correspond to a humiliating several months of 2020. It’s hard to imagine what form this will take except some sort of crisis in Trump’s confidence that leads him to opt out of the situation. 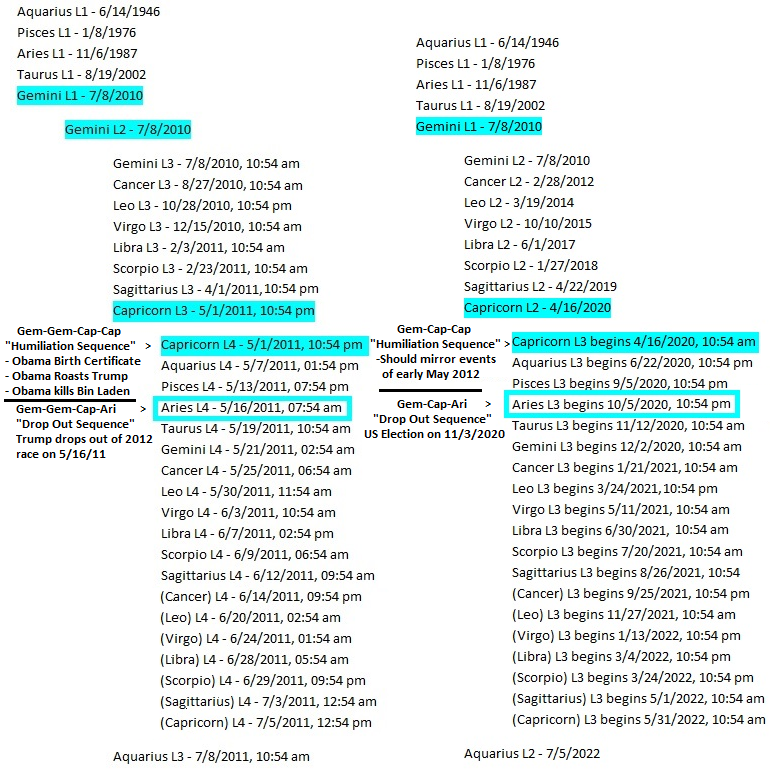 Under the releasing sequence Gemini-Gemini-Capricorn-Aries on May 16th 2011, Trump dropped out of the 2012 election. The next repetition of this sequence on a larger level occurs under Gemini-Capricorn-Aries, from October 5th 2020 – November 12th 2020. The 2020 election is on November 3rd 2020. This suggests that his exit in disgrace from the 2012 run for President is the foreshadowing event for the 2020 elections. Hard to spin that as a positive for Trump.

Trump’s previous encounters with the Capricorn-Aries sequence have also taken place at other times he has “dropped out” from elections. 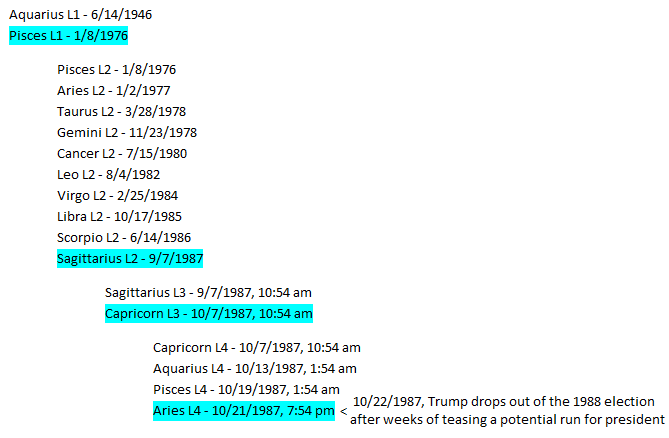 Interestingly, another candidate who had to drop out of the 1988 election was Joe Biden, due to accusations of plagiarism.

While he dropped out officially on February 14th 2000, he indicated on January 24th 2000 that he would quit over intraparty fighting. This date just happens to occur on a doubling up of the major and minor period involving these signs of Capricorn and Aries. 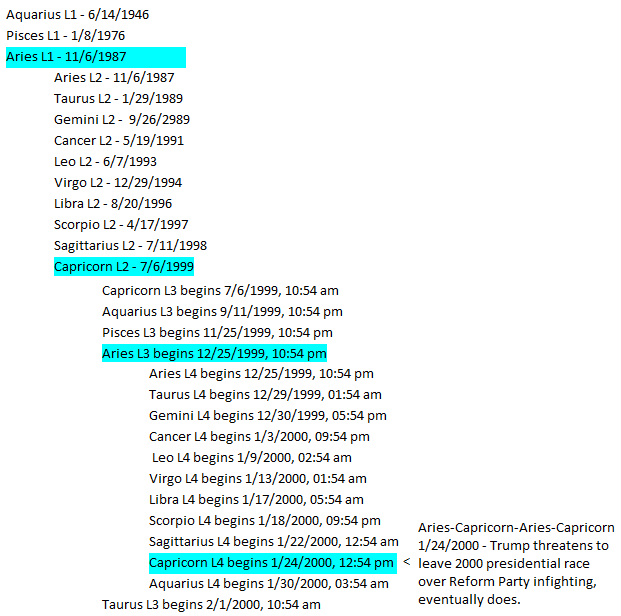 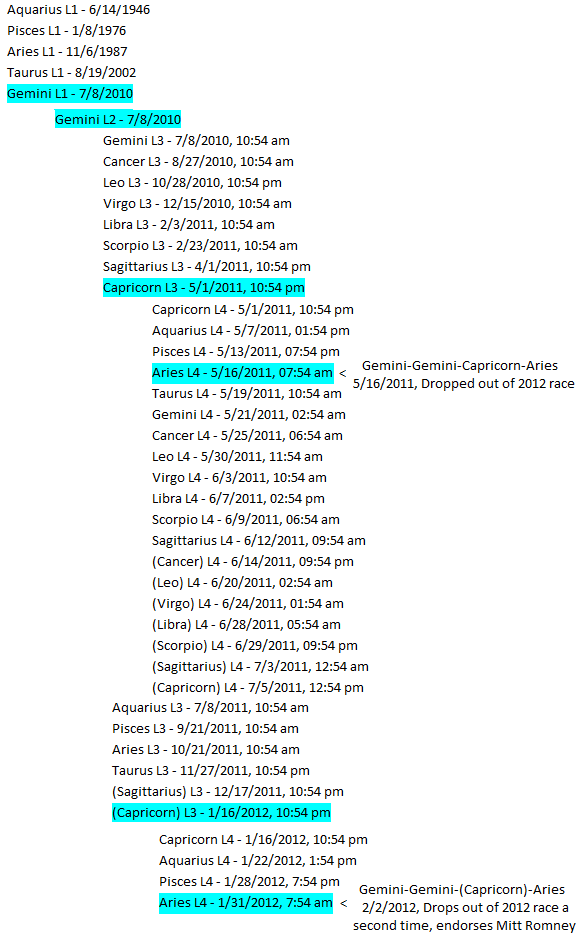 And yes, this sequence of Trump attempting to run again as an Independent should in theory foreshadow events around Trump in 2028.

Even when releasing from his adjusted Lot of Fortune in Pisces the Gemini-Capricorn-Aries sequence has not been good:

Even if you don’t accept that his Lot of Fortune should be considered to be in Pisces, if you release from his Lot of Spirit in Pisces then the period of the 2020 election was still foreshadowed by the events of 2011: 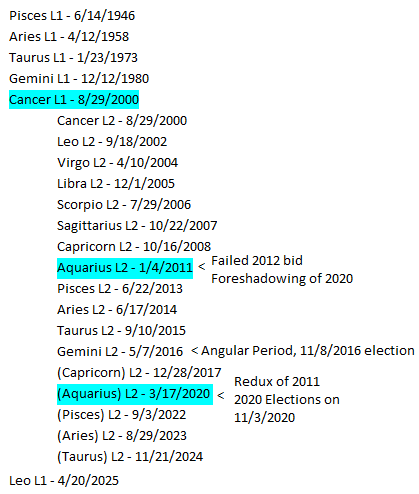 In any case I hope you can see why I would feel a bit more secure in making this kind of projection for Trump based on his Zodiacal Releasing. Get the popcorn ready, because if I’m right, it’s showtime.