We don’t know when Mark Zuckerberg was born, and he was born in New York which is an extremely closed state for birth times, so unless he decides to tell us or publicize his birth certificate there is no hope for clarification on this. However, I do have my suspicions about a potential rising sign or angle. One way I try to approach rectification is to think about what basic planetary nature someone most closely embodies. If you were to boil someone down to one of the basic planetary archetypes, which one are they most like?

Granted, I don’t know Zuckerberg personally so I can’t really say what he’s like. But at least in some public way, to me, Zuckerberg embodies the Mercury archetype most closely. This is because Mercury is the planet of language and communication, and he is ultimately a programmer, even a hacker, someone who writes in code, the language of computers.

Mercury is associated with intelligence and speed but also inconstancy and variability, the spirit of the youthful trickster and prankster. Zuckerberg was a computer prodigy as a teen, a Harvard dropout who “hacked” the school’s student ID photos to create FaceMash.com, a prank website where students could compare photos of fellow female students and decide which one was more attractive. Classy. But still descriptive of Mercury’s MO as a naughty, cheeky figure. Even in his image, he is slender and light-footed like the winged god, and his iconic hoodie is the very picture of Mercurial adolescence, a sartorial wink to his Mercurial “hacker” street cred even as he has become one of the world’s most powerful CEO’s, bitch.

His natal Mercury is in Aries, ruled by a retrograde Mars in Scorpio, and he is even quoted as saying this:

“Move fast and break things. Unless you are breaking stuff, you are not moving fast enough.”

This would be a superbly appropriate motto for his Mercury in Aries, the planet of speed and mobility in a sign not known for care and patience! A few other things are remarkable about his Mercury:

All of this adds up to a fairly remarkable Mercury, one that is resuming forward motion, bright in the sky, about to switch mode and element and empowered for better or worse by the opposition from Pluto. Someone with a keen intelligence, someone with something profound to communicate. This could all apply to him. The opposition from Pluto could also indicate his struggles with privacy concerns and the power of the data he holds in Facebook to affect or manipulate us.

There are several ways his Mercury could potentially take on such a big role in his chart:

I’m particularly drawn to a mutable rising sign for Zuckerberg, because in the case of a Gemini or Virgo Ascendant, both his Sun and Moon would be in cadent places, making Mercury not just the Ascendant ruler, but also potentially the predominator, which would further cement Mercury’s role in describing him overall.

On one level, his creation of Facebook is a Mercurial extension of this one Mercurial personality, a platform for the exchange and sharing of information, transformative for the Mercurial worlds of advertising, media and politics. But it’s also more than that,  part of the broader social media phenomenon which transcends any one individual. I think Facebook can be understood in two basic ways.

Zuckerberg launched Facebook.com on February 4th 2004, when the Sun was conjunct Neptune at 12 Aquarius. But this wasn’t an ordinary annual Sun-Neptune conjunction, it was square the Nodes, and 1 day before a full Moon opposite Neptune. In other words, a full Moon at its highest point north of the ecliptic. We might expect a configuration like this, especially for Zuckerberg who was born within 24 hours of a lunar eclipse, but what does this mean for Facebook? 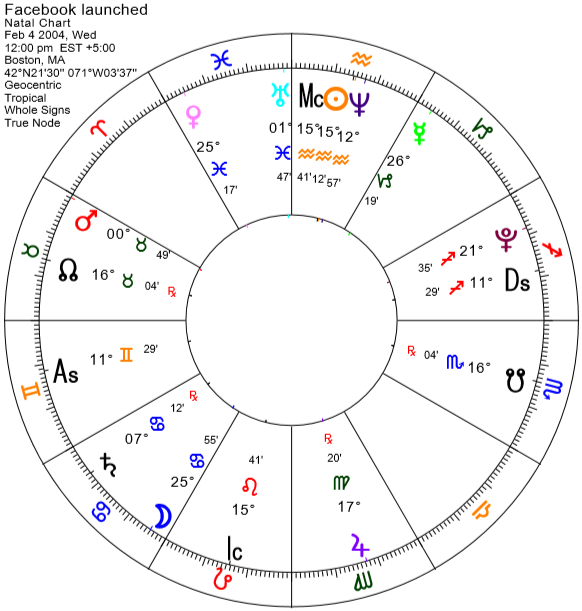 What this means is that there is something inherently “Neptune-y” that was brought into the world with Facebook. Facebook is after all a virtual world, an unreality. Is there anything less real than the lives we present on social media? Aren’t all the concerns about ideological echo chambers and fake news not squarely in the realm of Neptune’s astrological themes? Whose reality is real? Neptune is associated with pharmaceuticals, synthetic experiences, addiction, and is Facebook not an addictive digital drug? Facebook is forcing us to contend with the complexes associated with Neptune. In some basic way, Facebook is like Neptune, and this is suggested by the date of its launch, with the Sun conjunct Neptune.

There is another way to look at Facebook however. Facebook membership is currently at an unprecedented 2+billion people. If it were a country, it would be the third largest in the world. What kind of rare astronomical event happened in 2004 that might explain how the world got so connected so quickly?

On June 8th 2004, Venus was retrograde in Gemini, but it was no ordinary Venus Retrograde, it was aligned with the nodes of Venus, causing a Transit of Venus, where Venus visibly appears as a small dot crossing the surface of the Sun. 8 years later, on June 5th-6th 2012, it happened once more. These Transits of Venus occur in pairs over 8 years, and then 256 years apart (in the same sign). They can only happen at the nodes of Venus, currently in mid-Gemini/Sagittarius for the next several centuries.

The 8 year period between these two Transits of Venus in 2004 and 2012 conveniently bookend the period of Facebook’s titanic rise. In this time, over a billion people across the world connected across a virtual network to become “friends”. And what is the essential purpose of Venus? To unite people together. And that’s what Facebook has done in an unprecedented way. Venus then is the ‘social’ aspect of “social media”, whereas Neptune is the ‘media’ aspect.

On June 9th 2004, the day after the 2004 Transit of Venus, Wired.com was the first magazine to publish an article about Facebook, indicative of how Facebook had finally gotten people’s attention. At that time it was still just an enterprising startup exclusively for college students with only 250,000 members. Zuckerberg was quoted as saying in that time:

“I expected that a few people would do it at Harvard and they’d tell their friends, but I didn’t expect it would take hold as this all-inclusive directory”.

The Sun-Venus superior conjunction in Gemini in June 2008 is especially interesting, as it would be the crux of this 8 year period. In 2008, Facebook began to worry it had hit a ceiling of about 70 million users, and they were not sure if they could even cross 100 million. They realized if they wanted to keep growing, Facebook would have to become international. In January 2008, they started to crowdsource translations of the site from users, in order to achieve the most natural translations of Facebook features. By August 2008, Facebook crossed the 100 million user mark. It’s tempting then to see the June 2008 Sun-Venus superior conjunction in Gemini as a potential breakthrough period where the user-generated translations (Gemini ruled by Mercury) led to greater numbers of membership across different countries. This divides up the 8 year Venus period into two distinct halves, the national/American first half, and the global/international second half.

The June 5th-6th 2012 Transit of Venus is close to the date of two very important events for Mark Zuckerberg: On May 18th 2012, Facebook went public as an IPO and the next day on May 19th 2012, Zuckerberg married his long-time girlfriend, Priscilla Chan. These moves together can be seen as Zuckerberg’s maturation, moving his company from a private one to a public one, “making it official” with Facebook and Priscilla.

What This Means for Zuckerberg

In any case the reason I’m taking these transits into consideration is that if Mark Zuckerberg was born with Gemini Rising, then the Venus Transits of the Sun would have happened in Gemini, his 1st whole sign house. Not only that, but if he was born with the Ascendant close to 6-7 Gemini, then the Sun-Neptune conjunction at Facebook’s founding would have happened on his Midheaven at 12 Aquarius, showing how he would have been in tune with that transit and would have shown its profound significance for his life’s work, career and reputation. 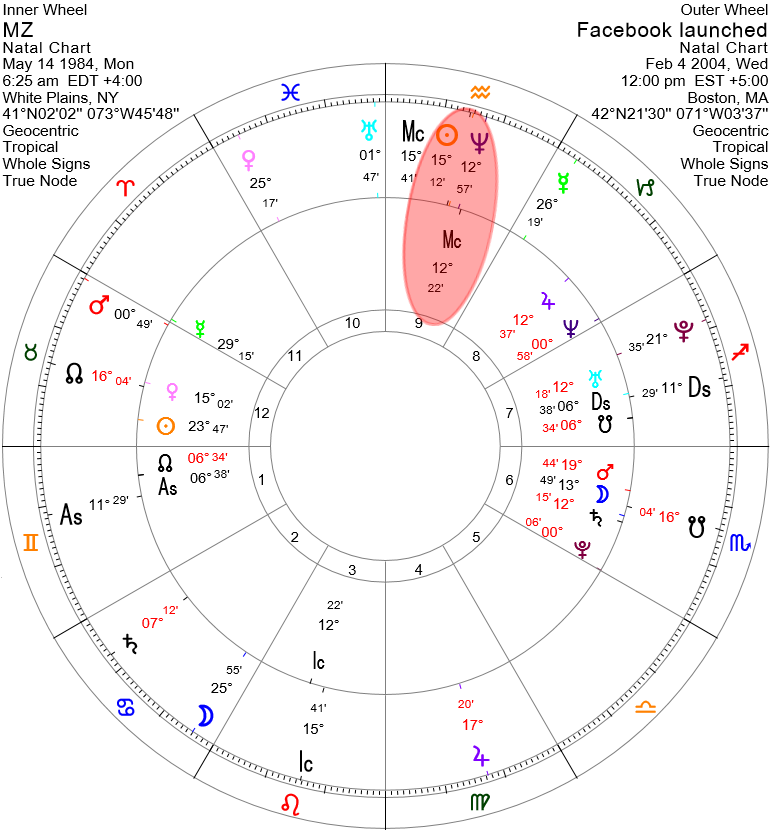 If Zuckerberg was born with Gemini Rising, then the ruler of his Ascendant is Mercury in Aries, in the whole sign 11th. This would suggest a particular area of focus in his life would be the 11th house issues of alliances, friendships, networks and organizations, which would make sense on its face since that is what Facebook is: a friendship network! Mercury indicates a kind of restlessness and busyness in these areas, and the possibility that these alliances could be alternately good or bad, business-like relationships. At the extreme end, this could mean betrayals and reversals with friends and allies.

Let us not forget that Zuckerberg was sued by his close friend Eduardo Saverin when he tried to cut him out of the company despite being a co-founder. This story was made immortal in the movie The Social Network. But after the legal confrontation and massive settlement there are apparently no more hard feelings between them.

Let’s not also forget the Winkelvoss twins who accused him of stealing their idea for a social media site which they had hired him to make for them, a story also featured in The Social Network. In other words, a business relationship gone bad, a Mercurial betrayal. But it seems that whatever hard feelings there were are gone. Zuckerberg is now consulting with the Winkelvoss twins on the feasibility of rolling out a Facebook cryptocurrency.

And that is a topic I wrote about here! A lot more work would need to be done to prove that he’s a Gemini rising, but you can see what my reasoning is:

What do you think?

One Reply to “The Astrology of Mark Zuckerberg and Facebook”