I have had many clients solicit electional consultations with me to determine the best time for them to get married. Several of them had timeframes that coincided with the 2020 Venus Retrograde in Gemini. In most cases, I tried to avoid electing times during the Venus Retrograde, but sometimes I didn’t. (Gasp! What a rebel!) Let’s first examine why we would generally want to avoid the Venus Retrograde.

Venus retrograde is the illusion of Venus’s backward movement through the sky from our perspective on Earth. Illusory, but meaningful. It happens 5 times every 8 years, forming a pentagram in the heavens.

What it means generally for a planet to be in good condition is that it would ideally be in its own sign(s) or sign of exaltation, in direct motion and visible beyond the Sun’s beams. Presuming you want the endeavor to be successful, you’d also want to make sure it’s not in aspect to malefics and otherwise separating from them, and ideally applying toward benefics. When a planet appears to irregularly move backward through the sky, similarly can its earthly correlations go awry. And that’s not just true because it rhymes. So the idea is that when Venus goes retrograde, it’s moving in a way it’s not supposed to, and accordingly the topics of unions and social harmony can be thrown off. Not only that but in the middle of Venus Retrograde periods, Venus is combust by the Sun, invisible, a period of radio silence from Our Lady of the solar system.

What’s So Bad About Venus Retrograde?

The ultimate function of Venus is to unify, reconcile, harmonize, beautify, integrate, etc. These are conventionally good things, accordingly Venus is a benefic planet. Typically, Venus carries this agenda out in all the different ways suggested by the signs its transits through and its interactions with other planetary complexes via aspects. But when Venus goes retrograde, Venus still tries to do this, but in unexpected or complicating ways.

Venus Retrograde relationships can veer between those which challenge valid and invalid preconceptions about propriety in relationships. For example, there is absolutely nothing wrong with marrying someone of a different race, but that is not to say that there might not be unique challenges to being an interracial couple in a more racist society. They may deal with racist attitudes from family members, friends and their broader society, and may have to navigate the racial and cultural blind spots of the more privileged partner. Venus is still good, uniting people together, but when Venus is retrograde, it brings about relationships which cross bridges and divides along with the beauty and complications that can arise. So you can see that it’s not so simple as Venus Retrograde=Bad as much as Venus Retrograde=Complicated.

Venus Retrograde relationships can be characterized by class differences, differences in nationality,  language barriers, interfaith couplings, interpolitical partnerships, in some cases LGBTQ relationships when they are not accepted by their families or broader social community. They might be someone you’d never normally go for, someone outside of the socially sanctioned expectations of who your partner should be. Like the girl-next-door going out with a biker,  the jock going out with the nerd, the Palestinian dating the Israeli, the beauty and the beast. 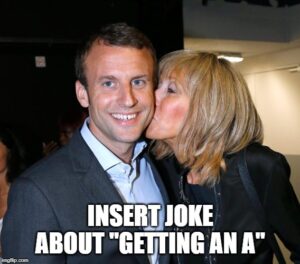 For example, the President of France, Emmanuel Macron met his future wife Brigitte while she was his teacher in high school, and while she was a married mother of 3 children. Scandalous! Brigitte Macron was born on April 13th 1953 at a new moon conjunct Venus Retrograde in Aries. They first met when he was 15 and she was 39, which means they met sometime between December 21st 1992 and April 13th 1993. Venus went retrograde in Aries in exactly that timeframe, March to April of 1993. They kept in contact over 13 years and apparently nurtured their relationship “from afar” while she was still married. She divorced her husband in January 2006 when Venus was retrograde in Capricorn. On October 20th 2007, in the aftermath of the Venus Retrograde in Leo of summer 2007, Emmanuel and Brigitte married. This was when Macron’s Sun-Venus conjunction perfected by secondary progression. She described their romance as  “a love often clandestine, often hidden, misunderstood by many before imposing itself”. This is like, textbook Venus Retrograde. Sex scandals are Venus retrograde’s bread and butter. It was a legitimately problematic relationship in the beginning that ultimately resolved itself over time, however messily. Now, by all accounts they are very happy together, but man, what a journey.

When is a Venus Retrograde Wedding Okay?

Therefore, the kinds of circumstances under which I would be more willing to elect a wedding during a Venus Retrograde is if these following factors are in play:

Even if I can elect a good wedding chart with Venus retrograde, this is not necessarily a guarantee there won’t be problems with the partnership, but at least the people within it may be more in tune with this rhythm of Venus, as a part of their astrological wiring and experience.

If these conditions are not present for the relationship then I would be wary of electing a wedding during a Venus Retrograde. I would think there would be, well, a greater chance of various social improprieties that would afflict the marriage: Incompatibility based on any number of social differences, attempting to cross a bridge too far to be together, infidelity, neglect, essentially the failure to properly unite, which is suggested by the contrary motion of Venus during its retrograde phases.

But some things you just can’t escape, and Venus Retrograde gets all of us once in a while, giving us the most exciting and delirious parts of life along with some of its messiest and disorienting. After all, according to the US Census the average length of a marriage in the US is 8 years, which just happens to be the length of the synodic cycle of Venus.

Let me know if you or someone you know needs help with electing their wedding, for more information click here.